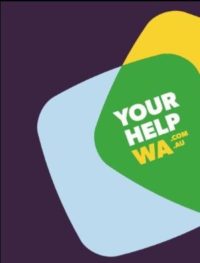 Western Australia’s Community Service Organisations have banded together to launch the #YourHelpWA campaign to send a clear message to the McGowan Government that more funding is urgently needed to help vulnerable and at-risk people.

More than 450 non-for-profit community-based organisations which provide care, support and services to Western Australians are part of the #YourHelpWA campaign.

The YourHelpWA.com.au website and social media channels have been launched to activate all Western Australians to join the campaign by posting their videos of support with #YourHelpWA, sign the petition and send letters to their local members of parliament demanding more funding to help make WA a better community.
Community Employers WA, Executive Director, John Bouffler says the community services sector is in crisis – demand for social services in WA is outstripping the available resources.
“More than half a million people in Western Australia need support, care and services for a vast range of reasons including domestic violence, mental health, hunger, community health care, homelessness and addiction – that’s enough people to fill eight Perth Stadiums.

“We are demanding the State Government commit to increase funding to the community service sector by 20 per cent which will help adequately fund high-quality services in our community and positively impact people who need it most,” Mr Bouffler said.
Representatives from the Community Services Sector have held meetings with senior bureaucrats in the Departments of Treasury and Finance, and with Premier Mark McGowan and he gave no clear acknowledgement of the scale of the issues faced.

The Western Australian Council of Social Service, Chief Executive Officer, Louise Giolitto says that the Community Service Sector and the State Government have reached an impasse which is underpinned by a lack of understanding the investment required for people who are in need in our state and for the community providers working on the frontline.
“We need the State Government to put people first and adequately fund the organisations that have skills, local knowledge and empathy so we provide high-quality care and services that will help change people’s lives for the better.

“The McGowan Government needs to take a leaf out of the New Zealand Prime Minister Jacinda Ardern’s budget and deliver a financial blueprint that measures its success on the well-being of all Western Australians,” Ms Giolitto said.
In the 2018 financial year the State Government received more than $5 billion in royalties from the mining and resources industry, and the Department of Treasury is forecasting that amount will exceed $6 billion in 2019/20.
YourHelpWA.com.au

“While State Government revenue is increasing, endemic social issues in Western Australia are placing a huge burden on the community services organisations to fill the widening gap that has been created by inadequate public funding,” Mr Bouffler said.
The Your Help WA campaign reminds all Western Australians that the money the State Government collects in taxes, fees and royalties is your money and you have every right to tell parliament that more of it needs to be spent on helping the growing number of people in need in our community.

Ms Giolitto says that poverty, hunger, homelessness and domestic violence are symptoms of social problems in our community, and West Aussies can easily help by supporting the Your Help WA campaign.
“Our Community Services Sector is there to support people often through very difficult times when people are at their most vulnerable. They need to have the funding to support our communities when they need them,” Ms Giolitto said.
For more information about the campaign visit YourHelpWA.com.au and follow, like and share content on the @YourHelpWA Facebook page, Twitter and Instagram accounts.

FAST FACTS
HOMELESSNESS More than 9,000 Western Australians, including 3000 children and young people, don’t have a place to call home.
DOM. VIOLENCE In Western Australia, almost 300,000 people have experienced physical or sexual violence by a current or former partner.
Family and domestic violence affects one in every four women in Australia.
FAMILIES 240,000 Western Australians are living below the poverty line and many of them are children.
CHILDREN Each week more than 20 000 WA children go to school hungry because they didn’t have breakfast.
LIVING COST 19,740 households had their power cut off in the last year because they could not afford to pay the bill.
EMPLOYMENT WA’s community services organisations employ more than 96,000 full and part time staff, that’s 7.0 per cent of the State’s workforce.
WA’s youth (15 – 24 years) unemployment rate of 14.5% is the highest in 20 years, according to the Department of Training and Workforce Development.
DISABILITY One in five Western Australians have some form of disability.